How I unexpectedly came up on a leotard.

On monday after ballet class, since it was on the same side of town, I went by my favorite thrift shop hoping to find some supplies for a couple of unrelated projects  (which I did).  Afterwards I browsed aimlessly through their racks of clothes, not seeking anything in particular but not wanting to stop either.  Making my way from the shirts and sweaters to the pants, I figured I could use some warm yet movable pants to practice at home in once the weather gets cold. And there, tucked between some yoga pants and leggings, I spotted it. A leotard!

Front view. As you can see it’s the strappy style. It also has a built in bra elastic thingy.

Upon examining the leotard, I noted that it was in good condition, no evident wear and tear damage.  The only problem that I could see was that it was the open back style with spaghetti straps, which I’m not used to wearing. However, it doesn’t hurt to try so I added the leotard to the (growing) pile in the shopping cart and headed to the fitting rooms.

Looking back at it now, I want to say that I was prepared for disappointment, as it seemed too good to be true to stumble across a leotard outside of a dance store and  have it also be my size. But right then, as I headed to the  fitting room, the possibility of it not working out didn’t even occur to me. I remember thinking that since I had gone to the thrift shop directly from class, I was wearing the same kind of undergarments that I’d be wearing under the leotard normally, so it would be an accurate fit.

It technically fit.  From the bottom half it was more or less the same fit as my regular leotard.  But from the front,  the neckline was a lot lower than what I would have liked. I read somewhere that “cleavage” is not a good look for a leotard, and the idea of doing sautes in it was terrifying anyway, so I immediately set out to figure out a sollution to the problem.

The obvious solution was to somehow make the neckline higher by adding some material to it.  At first I thought about going by the fabric store on the way home but then realized I’m at a thirft store! It’s like a magical place where there’s no limit to what you’ll find!

Where before I had strolled leisurely now I walked with a purpose. I headed back to the tank top section and started going through the clothes rack, searching for something that would work. I fount it, a black lacy tank top made out of a stretchy material. It was a good day to be at that store.

After making my purchases, I made my way home, already planning out ideas in my head. The sewing project that I was envisioning was ambitious – I only sew by hand, having no sewing machine – but I was feeling pretty confident.  Of course, I had stuff to take care of at home so I didn’t get around to my project until hours later. At which point Boyfriends said “Why don’t you just wear it  over the leotard instead of attaching it?” And since it was getting late, I decided to give it a try. But first I did reinforce the straps, just in case.

I’m figuring I will try it for evening class first (since it’s shorter and slower-paced) to see how it’s holding up.

Back  view.  Open back style sorta.

And now, me actually wearing it, with the Natalie Dancewear tights.  I will not be posting any picture from the front without the tank top because of double standards that exist in regards to body types and all that unfortunateness.  Don’t wanna be called “distracting” or “indecent” or worse, right? 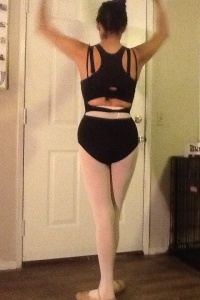 Back view.  I’m not too crazy about how it looks from the back.

Front view with tank top over it. Much better! 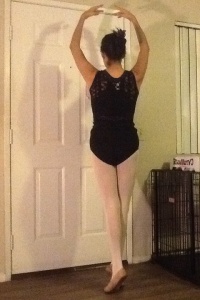 Back view with tank top, definitely an improvement.

Topics of Ballet Fun and Randomness