A long weekend usually means extra days without class, but this time I think I managed to make up for it. Of course, the weekend had its low points as well…

Started off my weekend with a really fun class at New Studio. It was a small class, just 4 of us, so we were able to get lots of individual corrections, particularly in center.

Our first center combination was tendu devant from croisse with a nice port de bras, brush back through first while changing arms, into arabesque, then attitude, promenade, plie and allonge, pas de bourre, other side. I found  myself really enjoying this combination. Usually when we tendu devant from croisse I’m used to a different port de bras (the “downstage” arm opens to second, and the “upstage arm” goes to high fifth), so I find the port de bras NS Teacher gives us (“downstage” arm almost in the same placement, but the upstage arm stretches forward really delicately, almost like an arabesque arm) to be so much more pretty and graceful.  The first time we ran through the combination I did the port de bras I’m used to out of habit, but then NS Teacher called me out on it. The second time through I watched in the mirror as I did the new port de bras, and I actually was liking what I was seeing. When we brush back trhough first into arabesque our arms would change, “downstage” arm coming forward, then when our leg went into attitude “downstage” arm went up into high fifth, while “upstage” arm opened out to second. We kept this port de bras as we went around in our promenade. My promenade, by the way, felt so stable! I went around without losing the position for both sides for all the run throughs of this combination. I know promenade with an outstretched leg can be much more difficult than it attitude, but for now I’m glad to see improvement in any kind. A big difference I’ve noticed is that I feel really pulled up during the promenades, really using my muscles like if I was trying to balance in releve, but making small, barely off the ground, sideways movements with my foot.

Across the floor we did tombe, pas de bourre, glissade, assemble (using our change of feet to change our direction) , then to other side chase gallop, run, pas de chat devant.  Going towards the right I felt somewhat confident about the combination. It was quick, so there wasn’t a lot of time to think in between steps, like ‘wait, is my glissade pretty?’ or ‘how do you assemble again?’. Actually, these “traveling” assembles are much easier for me that the kind where you don’t do much side to side moving, though I still need to work on the arms. To the left though, I forgot what I was doing mid-combination and had to start from the beginning. Luckily, due to the small class size we were going once at a time. Or else I would have been ballet student roadkill…

We did tour jetes, which were much less scary today than the first time I was introduced to them.  Tour jetes to one side were actually fun, though to the other side they remain very awkward. I’ll take awkward over scary. The side that felt fun was traveling towards the left, which meant that the first leg to take off was the right leg.  We did 4 times chasse back from arabesque then tour jete then soutenu back in the opposite direction, and balance in sous-sus with arms up in high fifth.  To the other side, it felt so off, like I couldn’t get the fluid motion of it down. It may be that I’m much weaker on one side than the other, but I don’t have such a discrepancy from side to side when doing turns in general. I really like my improvement in doing them to the first side, at least. It was a really fun class though, the kind that feel definitely more towards the encouraging side.

A few hours later, I managed to get a splinter (or some splinter-like piece of debris) in my foot, right under my right toe. Ouch. The initial sting hurt, but we discovered that it was pretty deep up inside my under-toe. It had to be removed with a sewing needle – double ouch.  Thinking back on it, I don’t know I managed to do it, sitting there with my foot propped up as Boyfriend – wearing a head-light of some sort – performed minor surgery on me with a sterilized needle.  Oh yeah, I remember – breathing and more breathing. But I did keep thinking about ballet to distract myself, especially being grateful for the long weekend and the extra time for my foot to heal. It’s crazy how when you dance any “injury” – however small, and loosely the term is used – that’s foot-related can be feel like an inpending disaster 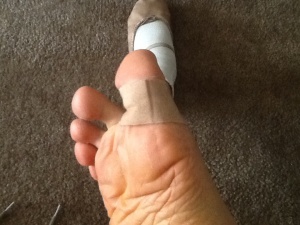 It’s been a couple days now. My under-toe is all healed up and ready to go! Even got in a home ballet practice session since there was no Monday class.

Then on Monday we went by a dance store store that I’d never been to. The reason I’d never checked it out is because I’d heard that they mainly just carry dancewear and shoes for children. But I had a coupon, so after calling to find out if they did carry a selection of items in adlut sizes (they did), we decided to check it out. My main motivation was tights, as the other dance store I go to had been out of my size in my preferred style the last time I’d paid them  a visit. I lucked out and found two remaining pairs of tights, and snached them up.

While there I also decided to check out their shoe selection. Before finding their selection of ballet slippers I did come across a clearance bin of pointe shoes – selling for $9.95!  So many pointe shoes! Not that I have a current need for pointe shoes or anything… but I did want to see what my foot would look like inside one, just out of curiosity…. I picked one up at random – I’ve never even held a pointe shoe before – and saw that it said size 9. Ok, so maybe I slid my foot inside it and just enjoyed seeing my foot all shiny, satiny, ballet pink… I didn’t get them. I’d like to say that it was because they would’ve been a source of temptation to actually use the (beautifully shiny, satiny) things – and they would’ve been – but the main reason was because the fit was tight. I didn’t attempt to put weight on them, or stand in them or anything, but after just sliding my foot inside the shoe it felt tight. Not that I even know how ponte shoes are supposed to feel or anything. But yeah, i didn’t bother looking for some that would fit because I started to feel a little awkward over being an adult who’s not en pointe nor shopping for a child who’s en pointe body looking through pointe shoes. And, you know, the whole temptation thing. I got to be responsible…

Anyway, I went off to try on some soft ballet slippers. I initially had my eyes on this shoe that instead of a drawstring had elastic all the way around, as well as the two across. This girl in my summer session had those, and she’d said they were very comfortable. Besides, I’m always fussing with my drawstring ends, so I thought it’d be a good option for me.  They were by Bloch, split sole.  I’m a little apprehensive about split-soled shoes, as the last split-soled slippers I’d bought did not really work out for me, but I was willing to give it a try. Unfortunately, the elastics on the top were too snug, and I could really see that becoming a problem.  It sucked, I really liked how they looked on my foot.

New shoes in the bag

So then the salesguy brough me over a pair of basic leather, full sole slippers, also by Bloch.  I tried them out and the felt more comfortable than the last pair, but huge.  I asked for one half size smaller and they were pefect. They still have a drawstring, but I guess I’ll have to continue dealing with it. I needed to get a new pair of back up shoes though. In my favorite pair of shoes I’ve noticed recently that the sole wants to come off  la ittle in a spot in the front where the thread has worn through. Also, the inner sole has also started to come loose. While I still want to continue using those shoes, I didn’t want to find myself without a pair of back up shoes that are molded to my feet and feel natural in case I need to switch to them. So I’m going to alternate between pairs of shoes for now. They’re both full sole leather shoes anyway, though the new ones feel so comfortable. The leather is so soft, too.

and on my foot

Anyway, it was a great long weekend! (Except for the ouch-y part, but maybe I’m repressing the memory!)

8 thoughts on “A Good Long Weekend And Some New Shoes”

Topics of Ballet Fun and Randomness